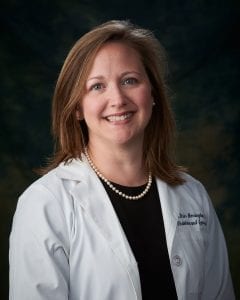 Dr Herrington is a native of Opelousas, Louisiana. She attended Episcopal School of Acadiana and graduated in 2000. She graduated as a Chancellor’s Medal Honoree from Louisiana State University in Baton Rouge and earned her B.S. degree in biology. She received her Doctorate of Medicine in 2008 from Louisiana State University Health Sciences Center in Shreveport. While in medical school she served as Class President. At graduation she was awarded the Dr and Mrs Adrian F Reed Memorial Award as well as the Aaron Selber, Jr Leadership Award. Dr Herrington then completed her Obstetrics and Gynecology residency at Ochsner Clinic Foundation in New Orleans. She served on many committees during her training as well as administrative chief resident.

Dr Herrington married her high school sweetheart who is a practicing gastroenterologist in Lafayette and they have three small children. She enjoys traveling, cooking but most of all spending time with her family.